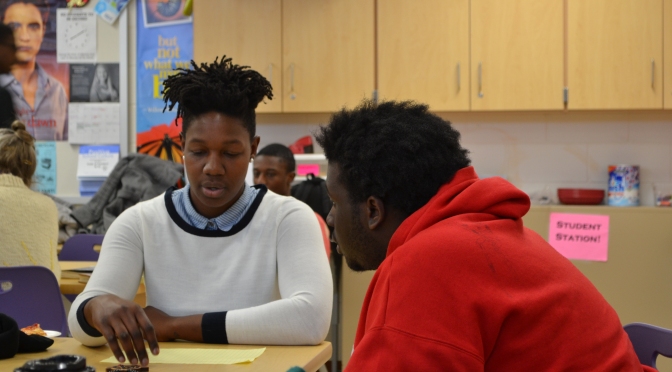 The WordUp kids meet every Thursday with a group of mentors/tutors and their team leader, Elese Daniels.  With less than two weeks until the Louder Than A Bomb semi-finals, this past Thursday meeting had a different vibe to it.  The kids and the tutors all knew that this was crunch time and you could feel it in the air.

Since November, the students have been learning different techniques and exercises to learn how to write their poems and they’ve had the chance to work on several different pieces.

Now, with the competition rapidly approaching, the luxury of time is gone and the kids have started focusing specifically on their performance pieces with the tutors.  At this meeting, they worked on their poems for the first hour and then performed for the group to get specific critiques.

Now that the students are working on the same pieces week after week, I have finally started to notice a difference in the students writing and performance.

Also, it has been really interesting seeing the wide array of topics for these young poets.  As one might expect, there are poems about love. Love obtained. Love lost. Love hoped for.

Still, there are also poems about loss, trials, pain, faith, and one fantastic poem that shines a different point of view on a very sensitive subject.

One thing that was stressed at the very first meeting was the idea of respect.  Respect for the speaker and respect for the voice.  In all the times I’ve been with these kids, I have never heard one student say anything negative about another students work. They might have some constructive criticism, but never anything mean which shows that this environment these mentors & tutors have created for these students is a safe place for creativity.

After the students were finished polishing and practicing their pieces, they all crammed into cars to venture out into the cold and across the wilds of Cincinnati to a poetry slam at Visionaries & Voices, an art studio & creative space in Northside.

In the past, few of our WordUp kids would attend these monthly poetry slams, but this time was different.  Nearly all of the students who attended the after school workshop not only went to the slam, but also participated in it.  In fact, the only poets who performed were WordUp kids.  That’s a vast improvement from just a month ago and if this is any indication of the progress these next few weeks, than these kids will be more than ready for Louder Than A Bomb!

Back before all the snow came to the tri-state, Poets Alex Dang and Clementine von Radics dropped by Aiken HS to visit with our WordUp kids.

Dang and Von Radics are both from Portland, Oregon and they are currently driving around the country on a poetry tour. On Feb. 12, they came to Aiken not only share their own poetry, but to also listen to the student’s poems and give them advice before the competition. Some were a little shy, but I did notice some students really took notice and they were excited to perform their pieces, get feedback and to get a little inspiration.

Dang said his biggest piece of advice to the kids was, “You don’t need to know about poetry to write poetry.”

“I want to inspire other people to write their stories and to do poetry because poetry doesn’t care about where you come from. Poetry just wants to hear a good story,” Dang said. “They don’t care about who you are or what you do. They just want to hear something really good from your heart and that’s what I love about this so much. You don’t have to go through all these trials and tribulations to write a good poem.  If you just write your heart out, people will gravitate towards you. It’s always that universal connection.”

The students also had a chance to ask questions.

One student asked, “How does your family feel about you touring?” 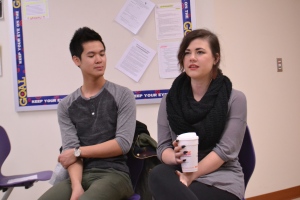 Von Radics relied with a laugh, “My dad is a guitar teacher and my mom is a book editor so they don’t really have a leg to stand on to tell me not to go into the arts. They already disappointed their parents thirty years ago doing that so, my parents are really supportive.”

Dang mentioned that he was the youngest in his family with three older brothers and that his family didn’t really understand what he was doing at first but that they are a lot more supportive now.

“It’s been a few years just to communicate and fight for what I really believed in and what I wanted, but, they’re still great parents and we’re able to talk about it,” Dang said. “They understand better now.”

Another student asked, “How has poetry helped you?”

Von Radics said, “I think I’m a much more emotionally healthy person because I’m a writer than I would be otherwise…I don’t usually write about personal stuff as much as I did when I first started writing…but it’s always been my go to way to heal and process emotions.”

Another asked, “What or who are your inspirations?”

Dang said, ” I originally started writing just for myself…just trying to vehicle through I my emotions but as I’ve gotten more and more traction with my poetry…I’m kind of seeing that I’m put in a position where I have noticed that  there aren’t a lot of Asian American people in the media.”

“I want to be the person that I never had when I was younger and I want to be able to inspire other people with my story,” Dang said.

Von Radics said as a last piece of advice for these kids (and everyone else), “If [you’re] passionate about [poetry] or anything, there’s not really a trick to get good at it other than to throw yourself into it head first. There’s not a shortcut. It’s always hard work and focus.”

Here is an example of their poetry. 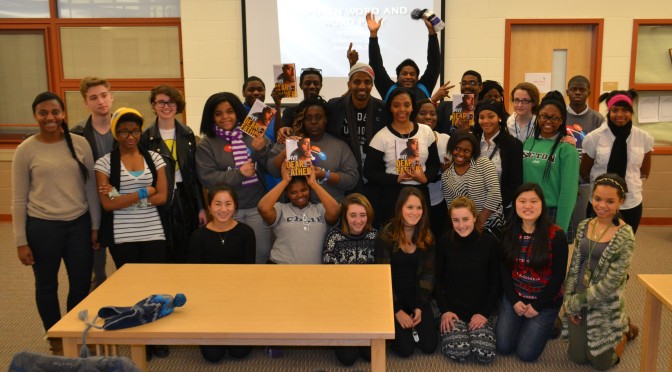 Grammy-winning poet, J.Ivy was on his way to a book signing to promote his book, “Dear Father,”  last Thursday and stopped by Aiken New Tech High School to share inspirational words with our WordPlay kids.

The kids warmed up the mic with their own poetry and, being joined by the WordPlay group from Seven Hills School, it was nice to see the kids really getting into their poetry.  I can start to pick out the different voices in each of the kids work now and that is what this event was really about.

Desirae Hosley, known as “The Silent Poet” and the Louder Than A Bomb (LTAB) coordinator for the Wordplay team, said this event was a chance to show these kids that everyone has something to say.

That was another theme for this event…that these kids are not alone.

Then when J.Ivy walked in the room, you could feel a shift of excitement. Kids would turn around to get a peek at the artist and then would quickly look away so you could tell they were in awe.

He opened up with his piece, “I Need to Write,” and here are a few lines;

Looking around the room, I could tell this poem really touched the kids. The words spoke about putting down on paper what a person was feeling and I know from working with these kids that they are very familiar with that process. One of the students who hasn’t really shown a lot of interest in these poetry sessions before really got into it while J.Ivy was haring his words and it was nice to finally see that emotion.

“I hope they get inspiration…to see that you can make a living perusing your dreams and perusing the art of poetry,” J.Ivy said.  “I’ve been performing and living off my art for a long time now and a lot of people still find that odd so I think it’s good that the young poets can see examples of those that are making a living doing it.”

With this past Monday being Martin Luther King Jr. Day, there were several celebrations around the country to celebrate the life and legacy of this great man.

Here in Cincinnati, the Martin Luther King Coalition held an event that was open to the public and two of our WordPlay poets participated by sharing their voices.

Tayshona Holliday, 18, is a senior at Aiken New Tech High School and regularly attends WordPlay’s weekly writing program and is a member of the WordUp team for Louder Than A Bomb.

Holliday performed an original piece titled, “Finally,” and was very excited to have the opportunity to perform in front of so many people.

“I feel really good,” Holliday said before she took to the stage. “I’ve performed before so it’s no big deal.”

She hoped before performing that her words would inspire the audience of all races.

“I believe this will open everyone’s eyes…to get them to see that not only are the older people affected, but the younger people, the younger generation are as well,” Holliday said.

Libby Hunter, executive director and co-founder of WordPlay, said something similar in a recent interview about WordPlay.

“There are just a lot of issues going on and we’ve seen the gambit of social struggles…so the kids are bringing a lot of baggage,” Hunter said. “When the parents are hanging on by a thread, the kids don’t have any choice but to hang with them.”

Programs and organizations like WordPlay are helping these kids not fall through the cracks and to get the help that they not only need, but that they deserve.

Holliday will be attending the University of Cincinnati in the fall as a journalism major where she will continue her writing.

Arderia Lankford, 14, is a freshman from Seton High School and is also a member of WordPlay’s Louder Than A Bomb team and a member of Against the Grain Scholars.

Lankford performed her original piece, “Now pass that on,” and said felt good about performing in front of a large crowd because she’s performed at slams before.

She said she hopes her piece will inspire people by saying, “if we’re going to fight, know the way to fight” and that there are a lot of injustice happening around us and things we can fight for.

“It’s not all just about fighting with your hands,” Lankford said, “you can also fight with your words.”

The crowd erupted into applause while the ladies performed their pieces and concluded by giving them a standing ovation as they walked off stage where they were seen literally jumping for joy for what they had just accomplished.

Diary of a Documentary

October 2014, three Northern Kentucky University students met with their professors and the non-profit director of WordPlay to discuss a possible documentary project. The idea was to follow a group of Cincinnati youth as they prepared to compete in a national poetry slam coming to Cincinnati in April. This blog documents our experience and the making of a documentary!

Louder Than A Bomb